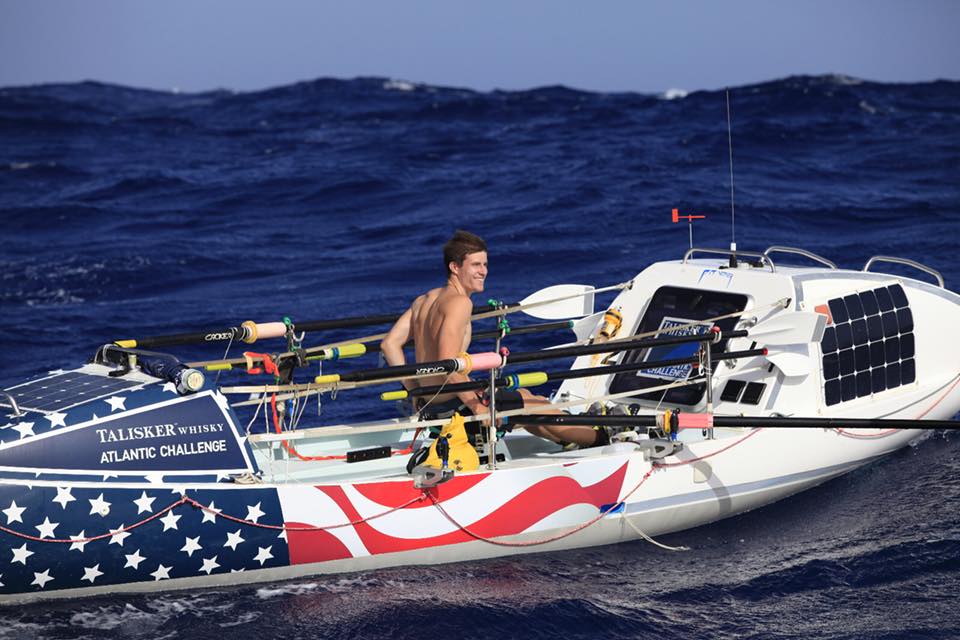 At 19, Oliver Crane ‘17 is about to become the youngest person in history to row solo across the Atlantic Ocean. “I wanted to try something really hard,” he said.

The Talisker Whisky Atlantic Challenge – called “The World’s Toughest Row” – is a 3,000 mile challenge that took Oliver from The Canary Islands, located off the coast of Morocco, to his current position: a few hundred miles from the finish line at Antigua in the West Indies. His boat, SS4, is a 23-foot-long custom-built ocean rowing boat, equipped with three solar panels that power a desalinator (for drinkable water), a VHF radio and navigational systems. Oliver is racing against teams and solo rowers from all over the world, but as the race progressed, he soon found himself alone on the open ocean.

Oliver first picked up an oar as a freshman at Peddie. He rowed all four years, three of them for Peddie’s varsity crew team under Coach Joe Murtaugh. “And I loved it,” he said. “I really fell in love with the sport. Murtaugh is the best coach in the world.”

At Peddie, Oliver gained a love of the sport, but he also gained confidence. “I had this realization that anyone could do anything they put their mind to. It’s so inspiring, living in the dorm and going to class with kids from all over the world who are ambitious and passionate about so many different things. People are interested in the arts and sports and everything you could imagine, but the common thread is the passion. Everyone is doing what they love. I got that with rowing at Peddie. It became something I loved and I think that’s really going to help me on this journey.”

This journey is more than a remarkable feat of athleticism and determination. It’s also an opportunity to give back. Oliver rows to benefit two charities: Oceana, an international ocean conservation organization, and Homefront, an organization that provides food, shelter, day care, after school programs, job training and more for families in need in Oliver’s native New Jersey.

Oliver's voyage home began on December 12. In preparation, he trained: lifting weights, working on the rowing machine and packing on the pounds. Was he nervous? A little. But he was even more excited.

“Just go out and do it,” Oliver said. “Life’s too short to wait. If you see something that even a small part of you thinks that you want to do, then just go out and try. The finish line doesn’t matter. Every day that I’m out there is going to be a small victory. Not to sound cliché, but just in preparing for this race I’ve learned so much. Even if I never spend a single night out on the ocean, I’ll come away better for it. It doesn’t hurt to try.”