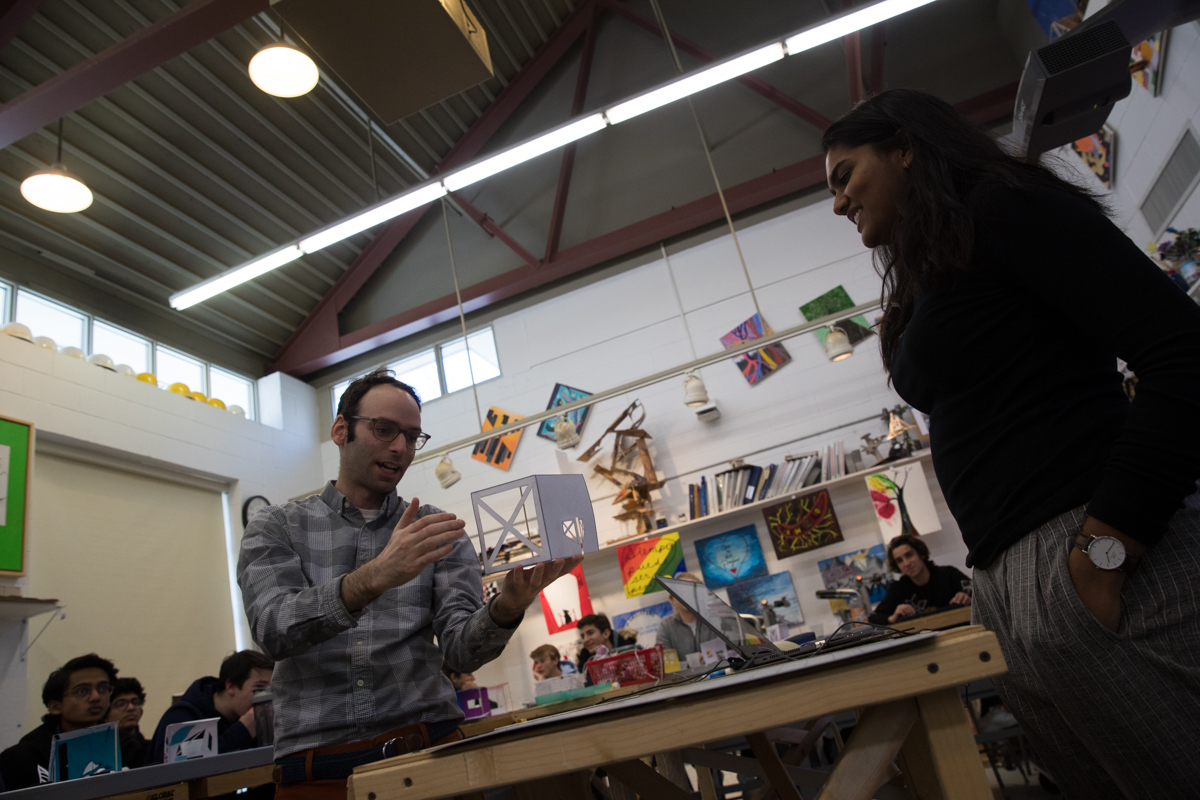 As a student, Craig Rosman '05 attended Cathy Watkins’ art classes, from Visual Arts Foundations to Painting. This month he returned to Peddie to speak to students of a very different Peddie art class: Architecture.

“Art is a part of architecture,” said Rosman, “in terms of having the technique and the eye developed to be able to take observations and put them on paper and have that be the spark of an idea. Technique didn’t come naturally to me. I always had a really heavy hand, but I was always bursting with ideas. Peddie was perfect because it wasn’t so technique-heavy. It was really more idea-heavy, conceptual, from Foundations on. As long as the idea was there, you were going to have a good experience with the program.”

Rosman completed a 5 year Bachelor of Architecture program at Carnegie Mellon University. After two years in the field, he received a Masters of Architecture II from Yale School of Architecture. Now, he’s with SHoP Architects, a firm that harnesses “the power of diverse expertise in the design of buildings and environments that improve the quality of public life”, where he’s helping to design what will soon be the tallest tower in Brooklyn. Occasionally, however, he returns to Peddie to offer his considerable expertise to Claudio Middleton’s Architecture classes. There, he shares the design progress behind his current project: 9 DeKalb Avenue in Brooklyn.

The 1,066 foot, 73-story residential tower will share space with the historic Brooklyn Dime Savings Bank. One of the unique challenges of this project is the integration of the old and the new, representing New York City’s modern skyscrapers while staying true to the aesthetics of the adjoining landmark. Rosman has spent the last two years designing this building and finding ways to reflect elements of the historic landmark, from the hexagonal floor motif to the modern take on the ionic columns, in the new building.

Architecture student Ruedi Kasabach '20 remarked, “My favorite aspect of Craig Rosman's presentation was how he described how important the design of the building was in correlation to the surrounding area. I have an uncle who lives in Dumbo, Brooklyn, and I texted him about the project. I told him of the hexagonal design due to the building having no "front", "back", or "sides." He loved the idea of this building and it's conjunction to the Brooklyn grid. I also enjoyed this part of the presentation because it showed the real world application. It made me realize the other aspects of architecture that goes into the design of a building, but that the building was designed to conform to the surrounding area.”

In addition to sharing his current work, Rosman took the time to give feedback on the work of Peddie’s architecture students. Their assignment was to design a room with the goal of exploring the tension between interior and exterior space. The cube-shaped models are colorful and creative, and no two are quite alike. Rosman’s critiques were gentle, and insightful, with an emphasis on encouraging creativity in design. On Peddie’s architecture program, he said: “It seems like there is a conscious steering towards more of a STEAM program at Peddie and diversifying how they’re teaching. I’m very excited about that. To see the robotics department growing and the art department growing and architecture becoming a part of the arts department...I hope that can be a bridge between the sciences and the arts at Peddie.”

Rosman’s advice to fellow alumni who want to get more involved? “You can have a bigger influence on Peddie by coming back and lending your time. Alumni have to figure out what their next five years are going to look like, but Peddie is always having to think about what the next fifty years are going to look like because they’re trying to teach students what they need to learn for their whole lives.”