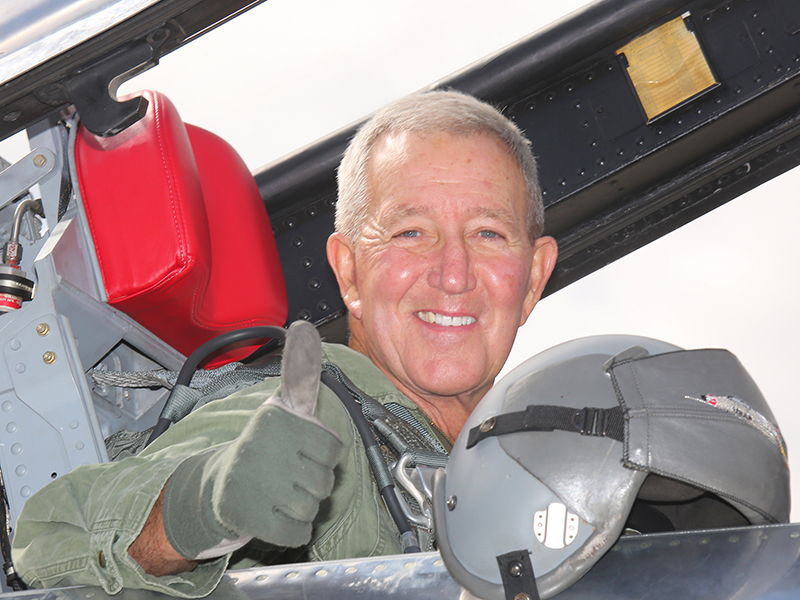 It was the first time in decades that Hopkins flew the F-100. “For 35 years I’ve been trying to remember what it was like to be a fighter pilot,” said Hopkins. “When I learned that there is one F-100 aircraft left still flying, and rides could be taken, I jumped at the opportunity.”

For the event, Hopkins donned the same flight suit, boots, rank and gloves that he wore in the late 1960s when he flew more than 300 missions in Vietnam. “When I saw the plane I got goosebumps. It was like going back in time … everything looked and smelled the same as I remembered.”

The North American F-100 Super Sabre, affectionately called the “Hun” (for 100), is renowned as the first U.S. jet fighter to reach supersonic speeds in level flight. Only those at the top of their pilot class in the 1950s and 60s flew the F-100, which traveled extensively over South Vietnam as the air force’s primary close air support jet.

The fighter had its control problems. The “Sabre dance” is the name used to describe a particularly dangerous behavior of the F-100 in which the aircraft would severely stall, causing the pilot to lose control. The Sabre dance claimed many aviators’ lives. Yet, the F-100 was a coveted assignment for pilots.

“In the 1960s, to have been a pilot in a beautifully designed single seat, single engine, supersonic fighter was thrilling, dangerous and adventurous,” recalled Hopkins. “It’s difficult to explain what it was like to be alone in this plane. The aircraft becomes an extension of the pilot’s body.”

Hopkins is the executive director and chief executive officer of the Super Sabre Society, a group formed in 2006 to celebrate and preserve the history of the F-100 Super Sabre and the pilots who flew them. The veterans’ organization is primarily composed of aircrew members who flew the F-100.

Inspired by his recent flying experience, Hopkins organized an opportunity for more than a dozen society members to fly the Hun in Fort Wayne, Indiana, in May 2016. It was the first time some of the men had been back in the aircraft since their final combat mission nearly 50 years ago, and the experience brought back both the excitement of flying the aircraft and the memories of active duty.

Bob Terbet was one of the society members to get a ride in the Hun, which he last flew in Bien Hoa during the Vietnam War. “I still had my boots and was able to squeeze into my flight suit,” he said. The sounds and smells brought back many memories.”

Not having flown the Hun since 1969, society member Ed Haerter began his flight somewhat ham-handed. “After a few minutes, everything seemed to come back, and all of a sudden 50 years melted away, and in my mind’s eye I was back doing my favorite, and by far, best job I ever had—flying a fighter,” he said. “Simply put, an incredible experience that is not to be forgotten.”

For Colonel Hopkins, the event was one of the very special occasions in his life. “We were—and still are—a lucky bunch of guys to have flown this magnificent airplane on a daily basis for years,” he said. “I am proud to have been with great guys who were some of the best fighter pilots in the world.”