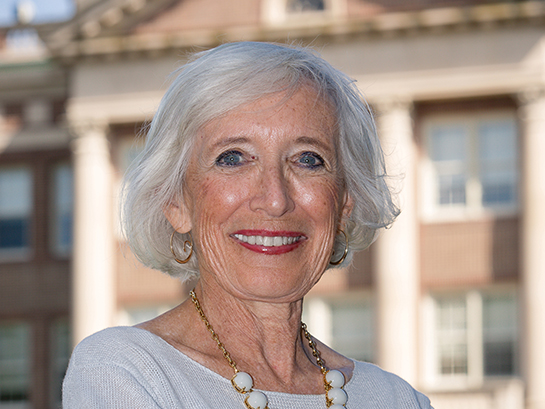 Anne L. Seltzer is one of the most important figures – and probably the most influential woman – in Peddie history.

This spring, she became only the fifth member of the Peddie community to receive the school’s highest honor, the Thomas B. Peddie Award for extraordinary service and loyalty to the school. With the award, Seltzer joined an illustrious quartet of Peddie alumni; Michael Armellino ’57 was the first to receive the award in 2007, followed by Finn M.W. Caspersen ’59 in 2009, Henry Christensen III ’62 in 2013 and Robert M. Kaye ’54 in 2014.

“Anne Seltzer earned the Thomas B. Peddie award because of the impact she made in the varied and critical roles throughout her career.”
-Peter Quinn, headmaster

After her family relocated to Princeton from Chicago in 1979, Seltzer looked for a teaching position in the area. She taught classics at Northwestern University and wanted to continue her career in education. When Seltzer met with Headmaster Ed Potter, she knew immediately she had found her home base.

“From then on, I have had a remarkable love affair with Peddie. It became my life, and my family’s life, too,” she said.

At the time, Seltzer was the only female teacher in the Peddie English department. “It made me take my role more seriously because I was breaking new ground,” she said. A few years later, she became the first female chair of the English department. Thanks to Seltzer, Peddie was the first school in New Jersey to offer a Women in Literature course, a milestone she called “one of my favorite Peddie memories.”

After the sudden death of Headmaster Potter in 1988, Seltzer became acting head of school for one significant year. She admittedly experienced mixed and difficult emotions at that time. Her close colleague and boss had just died and Seltzer needed to lead the healing of a mourning community, yet there were many challenges that she relished tackling. A grateful Seltzer remembered the strong support she received throughout the year from faculty and staff, the board of trustees and board chair, Finn Caspersen.

Seltzer was appointed the director of development in 1992. It was during her tenure that the school received the largest gift in its history – a $100 million donation from Walter H. Annenberg ’27.

“Working with Ambassador Annenberg and Headmaster Tom DeGray to plan the best use of that remarkable gift was a highlight during my time at Peddie,” said Seltzer. “It was a thrilling period because it really changed the focus and reach of the school,” she said.

Seltzer served as director of development until her retirement in 2003. Most recently, she served as a member of the Board of Trustees and continues to serve as an advisory trustee since the end of her term earlier this year.

“Anne Seltzer earned the Thomas B. Peddie award because of the impact she made in the varied and critical roles throughout her career,” said Headmaster Peter Quinn. “Peddie is a remarkable school because Anne helped to make it that way in critical moments. She is a humble leader, a revered mentor and a beloved Peddie friend.”