A passion for pinball 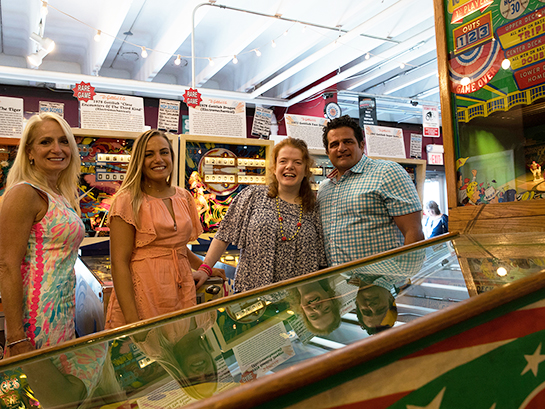 The Silverball Museum Arcade is a treat for the senses.

Located on the Asbury Park Boardwalk, just one block from the legendary Stone Pony, the place is alive with flashing lights, clicks and buzzes and pings, and the smell of classic boardwalk treats at the museum café.

People of all generations come to the Silverball Museum Arcade to learn about the history of games, and to play them. Nearly 200 machines are set to free play (patrons pay an entry fee at the door), including pinball games dating back to the 1950s, Skee-Ball and classic video games
from the 70s and 80s.

Jeanne Laman Ilvento ’79 and her husband, Robert P ’12, who owns the tribute to pinball and video gaming past, credit their daughter, Morgan, as the inspiration for the Silverball Museum.

“Morgan has autism, and she took a liking to pinball machines,” said Robert. This prompted Ilvento to purchase a pinball machine for their home. One machine led to two, which led to several hundred machines, so Ilvento decided to turn his family’s newfound passion into a business.

“Without Morgan, there would be no Silverball Museum Arcade,” he said.

The Silverball Museum first opened in 2009 in the basement of a retail store in Asbury Park. “I was one of my father’s first employees,” said Carly Ilvento ’12, who works for a marketing communications firm in Austin, Texas. “I was 14 years old at the time, and just about to start my second year at Peddie,” she said.

Mom and daughter both credited Peddie for their love of adventure. “Peddie instilled a spirit of seeking and exploring in both Carly and me,” said Jeanne. “We are a risktaking family.”

Each of the Ilvento daughters has her favorite museum activity. Carly enjoys reading the historical descriptions of each game, while Morgan loves to play Gorgar (1979), the first talking pinball machine.

The Silverball Museum expanded to a second location in Delray Beach, Florida, in 2016. According to Robert, there is no “typical” customer at either location. “At Silverball Museum, you’ll rub elbows with a wide demographic. Here, there’s something for everyone,” he said.