From the Peddie Chronicle. 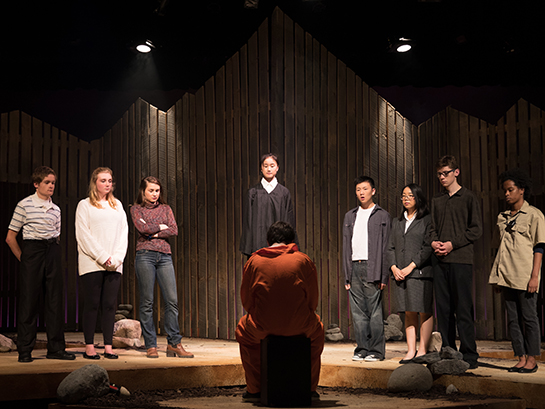 “The Laramie Project” by Moises Kaufman and members of the Tectonic Theater Project, is based on interviews with members of the Laramie, Wyoming community after the real-life murder of Matthew Shepard in 1998. In what was classified a hate crime, Shepard was beaten, tortured, tied to a fence and left to die because he was gay. The murder was seen as a watershed moment in American history.

"We have never been censored in any way and that is not necessarily the norm for all high school theater programs.”
-Elizabeth Sherman, director of theater

“I think it’s a really important play. There’s an opportunity right now for this to be bigger than just a play,” Sherman said. “It is important for our community to talk about these issues.”

She said the topic offered the cast, crew and entire student body an opportunity to think about the issues in the play. And, she said, she feels fortunate to lead the theater department at Peddie, where producing a show like “The Laramie Project” isn’t controversial.

“This is a play that many schools can’t produce,” she said. “We are really lucky at Peddie to have the support of the administration. We have never been censored in any way and that is not necessarily the norm for all high school theater programs.”

Theater teacher Jay Jaski said acting is, at its core, about taking risks. “This year we are taking some risks in our selections,” he said, noting that “Avenue Q,” the choice for the winter musical, also has some profanity and sexual themes that scare away some schools who consider it.

Tackling plays like “The Laramie Project,” Jaski said, stretch the performers to learn lessons that have nothing to do with their acting skills. “Some of these actors will be asked to portray characters who hate gay people,” Jaski said. “Plays like this require a lot from our actors.”

More than 30 million people around the country have now seen “The Laramie Project.”

Back to Chronicle page