Teacher perspective: What do you do with a B.A. in English? 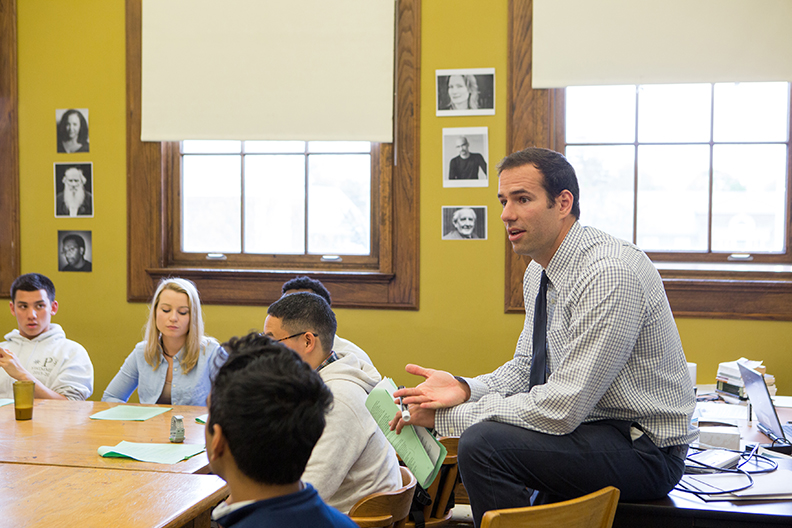 Matt Roach is the chair of the English Department.

These moments created a unique dynamic among viewers: We were not only looking at the amazing acting, singing, and puppeteering on stage but were also glancing around to see who else was laughing and at what.

I felt eyes on me right away, during the opening number, “What do you do with a B.A. in English?," and so I laughed extra hard, hoping to show that I, and the whole Peddie English Department, can take a joke. Ha-ha! It’s funny because English is useless! I thought to myself darkly, crying on the inside.

The question and song have continued to haunt me in the hours and days since, and it doesn’t help that the tune is stuck in my head. “What do you do … with a B.A. in English?”

My own answer is pretty basic: I teach other people English. This has worked out very well, as I have a job that I love and a degree that I use every day.

To me, the true value of majoring in English -- or taking it at Peddie -- is to be able to read the world around you and question the premises and easy answers of society.”

And while teaching is, for me, the ideal career, there are other utilitarian answers to the glib question the song poses. Emma Watson has a B.A. in English, so acting is on the table. Toni Morrison’s glorious writing career began with an English major. Mitt Romney majored in English, so you could run a successful business, govern a state, and then run for President and Senate.  If you’re interested in finance, you might study English like Hank Paulson, former CEO of Goldman Sachs and Secretary of the Treasury. You could also create musicals like “Avenue Q” (the show’s co-writer was an English major).

But answering this question based simply on utility is too simple (even though that’s the whole joke). To me, the true value of majoring in English -- or taking it at Peddie -- is to be able to read the world around you and question the premises and easy answers of society.

As an English major, you learn to appreciate great art (like Peddie’s musical this year) and articulate the reasons for its greatness. Like Avenue Q’s protagonists, you engage in a lifelong search for purpose. You think on multiple levels of meaning, so you’re able to spot insidious advertisements, discern credible news sources, and recognize hypocrisy in politicians. You become an expert on social media, and your texting skills are unparalleled.

And, you learn to critique the world around you. As an English major, you might wonder, for instance, whether Avenue Q’s “Everyone’s a Little Bit Racist” presents dubious false equivalencies that blithely glaze over systematic inequalities. You might question the musical’s rosy portrayal of urban gentrification or its complicated politics. Finally, you might understand how the play’s use of puppets functions as, at once, a satire of Sesame Street; a metaphor for race, gender, and class; and a self-conscious bit of artifice to keep things entertaining.

What do you do with a B.A. in English (or 1-4 years of English at Peddie)? Whatever the heck you want to do -- and you’ll do it with communication skills, the ability to perceptively read people and artistic works, and the understanding that life is a joyful experience.