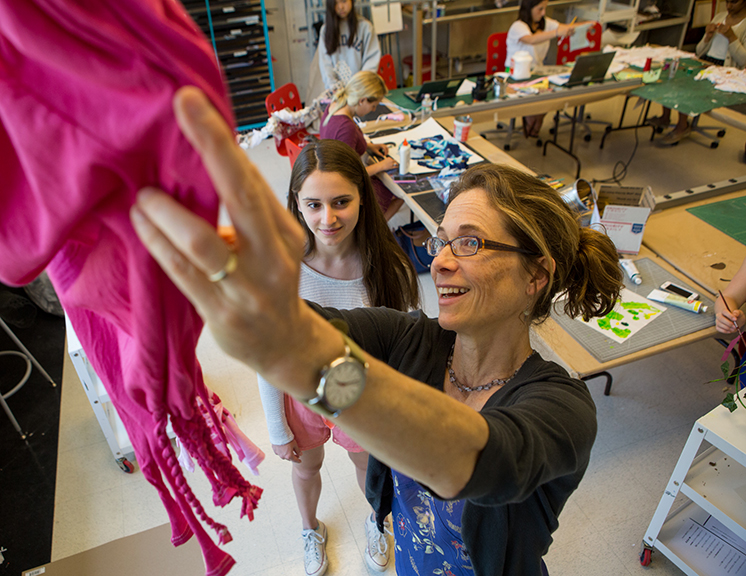 Cathy Watkins has served many roles in the Peddie Art Department and campus-wide over her 29-year tenure. She is currently the director of the visual arts program, and reflects on the particular courage required of student artists to pursue the discipline.

I am a painter and a sculptor who spends much of her time endeavoring to help teenagers do these same things. I’ve been teaching for 29 years - it’s a very long time to do something. People find it startling. (Often, I find it a bit startling myself.)

Recently one of my artists, a lovely girl from my art history class, came to me asking to leave a bit early because she was taking her driving test. We got to talking about parallel parking and how nervous she was about it. I was reminiscing about the night before my own driving test (36 years ago, but it feels like yesterday). I was in the family Chevy, looking in the rearview mirror at my father with his orange cones and frustrated expression and frantic arm movements. I was on the verge of losing my nerve. Then my dad regained his composure, put down the cones, and approached the window. He reassured me, “You know, artists make excellent drivers because they can keep track of multiple pieces of information in their field of vision without losing focus.”

Now, I have no idea whether or not there is any truth to this hypothesis. I did, in fact, parallel park successfully and pass that driver’s test all those years ago, but a recent Google search failed to yield any scientific evidence suggesting that artists are good drivers. Truthful or not though, it creates a useful visual metaphor for the way I envision the process of composing a painting or a sculpture. If you think of the rearview as the canvas, elements come and go within that frame. The artist’s mind is juggling shapes and colors and ideas, like so many cars passing in and out of view. You have to hold in your eye what is in front of you, to your right, to your left, and in back of you, with equal attention. Now, mind you, I’m a good driver (no accidents, no driving offenses), but in my head, hurtling down the NJ Turnpike at 65 mph always feels just a little uncomfortable, a little dangerous, a little reckless, which is exactly how it feels to try to make a painting. Although I always have a starting idea and some rudimentary sketches, once I begin laying down the paint, the process is rarely systematic or predictable. I make a choice, then I react to it with another choice. A new idea occurs, I try that. I sit down. I stand up. I wipe away some marks. I mix a new color and try again.

...but in my head, hurtling down the NJ Turnpike at 65 mph always feels just a little uncomfortable, a little dangerous, a little reckless, which is exactly how it feels to try to make a painting.”

One of the most difficult challenges about teaching young artists is to sell the riskiness of this enterprise. I don’t mean the risky finances or social acceptability of art-making, I mean the risk of all those hours spent trying to resolve color and shapes and ideas in order to create an interesting tension, one that teeters on the edge but doesn’t collapse. The risk of making a lot of bad, or boring, paintings in the hopes of birthing one that strikes a delightful ambiguity. I empathize with my students about how hard it is to endure the self-doubt, all those nagging voices whispering critiques in your ear. I encourage them to be playful, to invent gaming rules for themselves that might free them up to make unexpected discoveries. I encourage them to be brave and stick with it, stick with it long enough for the mess to resolve itself.

One of the games I play in my own studio practice is to, whenever possible, to work on a discarded canvas, one that’s already marked with colors and shapes to start a conversation. By the time I’m finished very little, if anything, of the original painting remains, but this process helps me overcome the intimidation of a blank canvas. I like to think of the painting as a sort of archeological dig, with layers of previous realities embedded beneath, lending character and history.

It’s often hard for me to recall the genesis of a particular painting because I layer over them so many times. In the case of this canvas, I believe it began with thoughts about the surface of a particular lake up in northern Maine, and the way it separates two entirely different worlds, one of air and one of water. This is a place I always associate with my father, who is dead now. And so during the process of starting this painting, I conflated these two ideas, and the imagery of the painting came to suggest a kind of threshold or veil between the worlds of the living and the dead. I titled it "Dangling Conversation" from a Simon and Garfunkel song about the difficulty of communication, about regret and things left unsaid. My version is about being left behind, in a kind of suspended animation. It’s about trolling the depths, trolling your dreams, in search of elusive fragments of memories of someone who is gone. 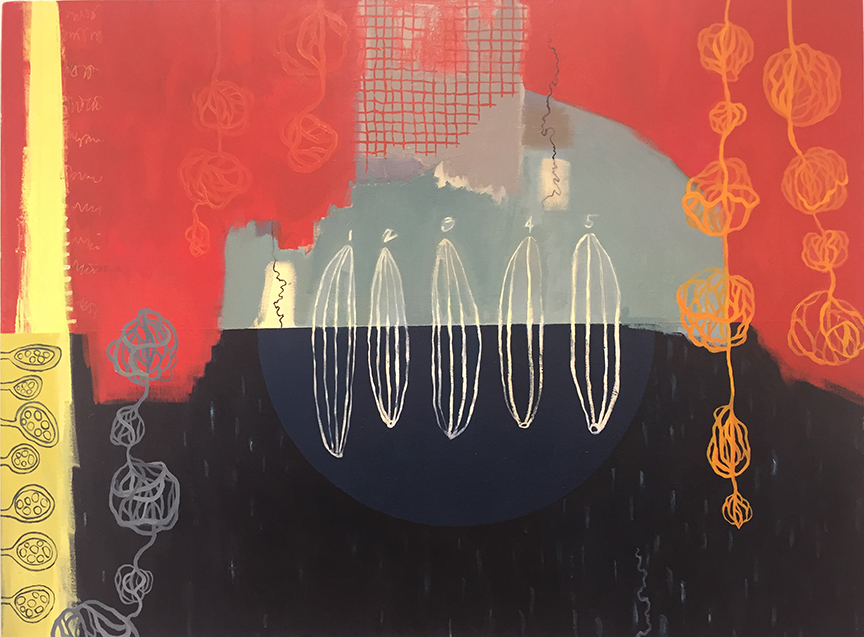